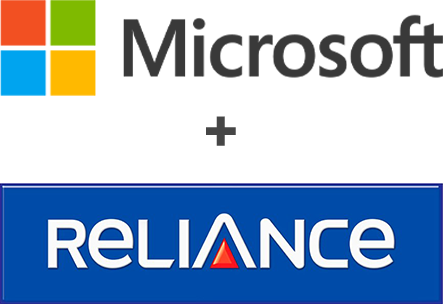 The agreement will see the companies working together to help businesses in India adopt technologies, such as data analytics, artificial intelligence, cognitive services, blockchain, internet of things, and edge computing.

As part of the agreement, Reliance’s Jio unit will set up data centers across India, with Microsoft to deploy its Azure platform in these data centers to support Jio’s offerings. The initial two data centers, located in the states of Gujarat and Maharashtra, are targeted to be fully operational in 2020.

Jio will also provide its internal workforce with cloud-based productivity and collaboration tools from Microsoft.

The company also offered updates on its JioFiber product, an optical fiber-based fixed-line broadband service of Reliance Jio, which will begin its commercial operations on Sept. 5. Plans will start from 700 Indian rupees up to 10,000 rupees per month depending on usage plans.

Moreover, the company said it is aiming to list its consumer businesses Reliance Jio and Reliance Retail in the next five years.

While most of the world is currently under the shadow of the Covid-19 lockdown and the US-China standoff, Reliance has used this time well to capture global market share in the space. Although there is no clear statement from neither company that the deal will go through, one thing is clear – one way or the other Jio is looking to dominate the data space and spreadhead India’s candidature as a strong global player in the digitized world market of the future.

Insights about this deal and what it would result for India?

Though the two tech giants have been in discussions for about a year now, the financial and operational details of the deal are still unclear. This deal is monumental for both the companies- not only from a short term monetary standpoint but also from a long term business strategy as well as a shot in the arm for India-US economic ties.

Both companies are icons of growth, success, and shareholder value and they coming together for a common purpose is something to look forward to for India.

Microsoft’s intended investment in Jio would be its largest in India till date, much larger than the $200 million infusions in Flipkart for a 1.72% stake in 2017. Microsoft India has generated revenues of about US$ 2 billion in India from its products as well as R7D services for its global parent. Microsoft has, in the past, struck several multi-billion dollar deals – Linkedin, Skype, GitHub, and Nokia devices among others – but almost all of them have been acquisitions rather than a strategic/ financial investment. If it’s deal with Jio moves ahead it will be the biggest such deal in its 45 years history.

Impact of FDI on the future of telecom in India:

As listed a series of investments have been made by global companies into – including the much talked about Saudi Armaco investment into RIL’s petrochemicals and refinery business. If the Microsoft – Jio deal goes through, it would mean that RIL will effectively reduce its US$20 billion debt at an enterprise level to zero. While this will usher in a victory for RIL/ Jio, it leaves a lot for its competitors to worry about. With these investments, Jio is set to launch itself as a significant player on the international telecom and technology scene and will cement Jio’s role as one of the key drivers of internet and digital adoption in India.

The deal between Jio and Microsoft is likely to trigger a wave of price disruptions in the market. With this possible deal, Jio is declaring its intention to be a market leader in the data services industry. With help from Microsoft, Jio plans to roll out affordable cloud-based solutions for SMEs. This is to give an impetus to the country’s data center business, enhance the affordability of enterprise solutions, and drive substantial adoption of data growth among SMEs who are currently not using such services.

Though Jio has so far not revealed any concrete information, it is believed to target SMEs by offering data+software service bundles and hosted apps. Of course, Jio would enjoy an advantage as the first mover in marketing its cloud services to this segment.

An affordable enterprise services package coupled with demand for video and data privacy needs will boost demand for the data center business. Jio’s upcoming data centers running Microsoft’s Azure platform would arm all Indian Businesses with the capacity to speed up their digital transformation and be globally competitive.

Such central data centers will serve to consolidate a company’s computing resources/ servers and data storage to efficiently manage network requirements. These can range in size from a small room with a handful of servers to a sprawling warehouse housing thousands of servers. As much as 30-40% of the 700-800 MW capacity demand growth in India is expected to come from data centers.

The Microsoft Jio deal could have a positive impact on how India is seen as an emerging market moving ahead swiftly as an efficient and effective digital player.